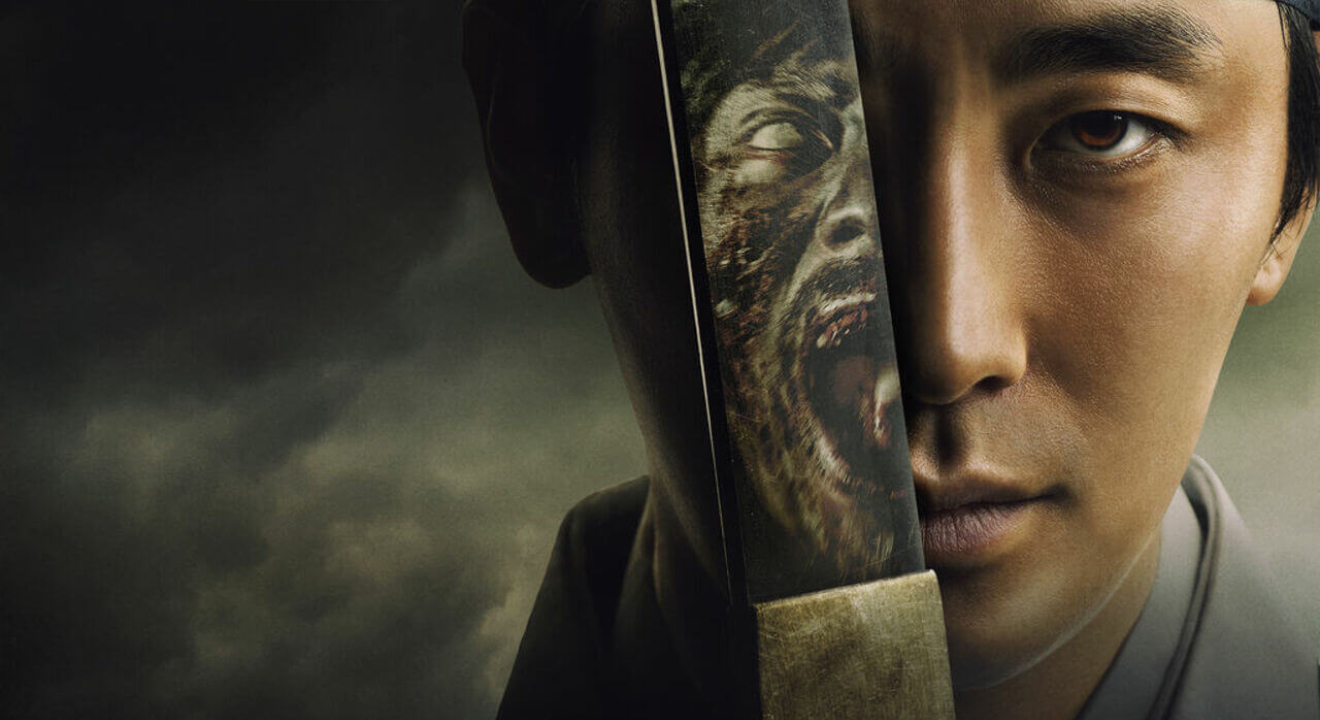 Like the film series ***Along with the Gods***, which was mentioned earlier in this series, Kingdom is based on a popular South Korean webcomic—in this case, the comic’s writer also wrote the TV series. It’s without a doubt the most popular of the Korean Netflix series abroad, and is now into its second season on Netflix. The core premise of Kingdom is simple: in the wake of historical hell breaking loose in Korea, a much worse kind of hell breaks loose. The historical hell is that of the Imjin War, a series of attempted invasions of the Korean peninsula by Japan, which began in 1592 and ultimately failed in 1598. The worse hell is… zombie apocalypse, in a style reminiscent of The Walking Dead.

Except it’s not just a ripoff of The Walking Dead transposed to a Korean historical setting. Somehow Kingdom manages to balance its two halves: it’s completely a zombie series, and completely a compelling historical drama. What I mean is that a lesser director or screenwriter would have produced something more like a modern zombie apocalypse show, except with a thin veneer of historical costuming, or a properly historical show with some poorly-considered zombie stuff thrown in somewhere in the background.

Kingdom doesn’t mess around this way: it manages to meld the two genres together in a powerful, credible, and intelligent way. To mention just one small example, there’s a brilliant scene fairly early in the series where characters who are desperate to contain the spread of zombies find themselves having to balance practical concerns with the demands of a member of the upper class who loudly insists that Confucian burial norms and traditions must be strictly maintained regardless of the emergency. There’s many ways to read this, of course: it could be meta-commentary on the effect Confucianism has had on South Korea’s experience of modernity. But it’s also a scene that feels true to life, something that probably would have happened somewhere, early in some hypothetical zombie outbreak.

Of course, some people might balk at that idea, responding that they don’t really want a zombie pandemic apocalypse in their heroic fantasy game—or that Jeosung, as described in The Koryo Hall of Adventures, isn’t really a setting that seems designed to use with a zombie apocalypse narrative.

But that’s to miss the point: what Kingdom really does is to provide a compelling snapshot of women and men from throughout the traditional Korean class system, and all of the different ways their class and culture might shape their reaction to an unprecedented, epic supernatural crisis. There’s nothing preventing you from getting ideas that could be useful in imagining reactions to some other supernatural crisis than one involving the hungry undead.

For example, there is palace intrigue, for after all that’s a staple in non-fantastical historical melodramas set in Korea, but even this is rethought to ask fresh and interesting questions of a nature useful to someone running a fantastical RPG in a Korea-inspired setting: how might palace conspiracies unfold differently during a a weird or magical crisis? Whether you’re running a game of commoner adventurers, aristocratic crusaders, or scheming royals from different lands within the setting, there’s something to inspire both you and your players.

There’s also the fact that behind or beneath every compelling high fantasy setting, an apocalypse is quietly lurking. Whether it’s some long-ago fallen kingdom the ruins of which furnish modern adventurers with adventuring locales, or an apocalypse that may come if the adventurers fail in their quest, ends of the world are ubiquitous in fantasy worlds, and especially in fantasy RPG settings.

That’s not to suggest that you need to unleash a zombie plague upon your players, of course. You can do it, if it seems like the kind of fun your players would enjoy.

But you could also slip it in other ways: in the form of visions that plague your party’s mudang anytime she comes in contact with a certain spirit, or maybe mentioned in ancient texts the party finds in a ruin, with the possibility of them finding themselves trapped in some ancient being’s memories of the last great outbreak. Perhaps there have been regional outbreaks, each time barely suppressed, going back all the way to some great zombie-choked dark age in the distant past.

Still, even if you intend never to include a single zombie in your game, Kingdom can definitely inspire you in crafting world-shaking events with a distinctly Korean flavor, as well as modeling pretty well how weirdness and terror traditional Korean culture might have looked at apocalypse differently. Similarly, if you’re not particularly patient with historical dramas that lack a supernatural element, this show can at least give you a sense of the kinds of palace intrigue and peasant struggle plot lines that abound in mainstream Korean historical dramas.

Besides, to be frank, it’s probably the best supernatural TV show ever to come out of South Korea. If you’re interested in Korea and the fantastical, you owe it to yourself to check out Kingdom.

I highly recommend anyone who wants to play in the world of the Koryo Hall of Adventures to watch this TV show as it was a very important part of the visual inspiration for the campaign setting. It also inspired the location Dr Lee Jaema Provinvial Clinic in Daewanguk in the campaign setting book where players can go to resolve some undead-like conditions.